Deprecated: Methods with the same name as their class will not be constructors in a future version of PHP; Color has a deprecated constructor in /home/bcph911/public_html/Dec-2017/templates/dream/features/color.php on line 11
 Departmentals
Departmentals
You are here: Home

New Autos, To Probe All Accidents,

To Go Into Service When Equipped

Crews Will Test Brakes of Machines Involved and Photograph Scene Three automobiles for the "crash squad" of the Police Deportment have arrived and will be placed in service as soon as they are equipped, Capt. Henry C. Kaste, head of the Traffic Division, announced yesterday. The machines will investigate all automobile accidents and will have decelerometers for testing the brakes of cars involved in crashes, as well as photographic equipment for recording the actual conditions after the accident

They will have two-way radios, sirens and blinking red lights to enable them to get to the scene before the positions of the cars have been altered. The crews, graduates of the University of Maryland's Traffic School, will render aid to the injured and will reroute all traffic until the conditions have been photographed and measured.

Officials hope to relieve the foot patrolmen of responsibility for traffic accidents. Members of the "Crash Squad" will be given two days, A month in Traffic Court to handle their cases, and the new manner of collecting evidence is expected to result In more convictions, particularly in fatal accidents.

Sergt. Clarence O. Forrester is head of the squad, which is still officially nameless. Other cities having similar departments have decided upon "Accident Investigation Department" for a title, and it is expected that this choice will be made here also.

The "crash squad" was organized alter a report from the Baltimore Safety Council in April, 1937, which recommended it as "a vital need for the securing of evidence." Coincident with the council's report, the grand jury urged the squad's creation as a means of reducing occident fatalities and injuries.

Three traffic experts will appear before Governor Nice's automobile insurance committee at a meeting to be held at 8 P. M. Tuesday at the Emerson Hotel. They are:

Dr. S. S. Stineberg, Dean of the College of Engineering of the University of Maryland, who is conducting the traffic school there. John P. Rostmeyer, director of the Baltimore Safety Council. Preston D. Callum, chairman of the Baltimore Traffic Committee. The committee was named by the Governor shortly after the first of the Year to make a study of automobile Insurance in the State, and to make Recommendations to him and the next General Assembly.

Members of the committee are:

Into Speeder On Hanover Street A radio car patrolman is recovering today from serious injuries received when his scout car crashed into a machine on the Hanover street bridge during a seventy-miles an hour: chase after a speeding driver.

The policeman, Robert Rice Thirty-eight, and Gardner Sparhawk, first block of Wheeler street, driver of the other machine, are under treatment in the South Baltimore General Hospital.

of Hanover street and Reedbird avenue. He gave chase and had nearly caught up with the car when his

car skidded on the bridge and crashed into Sparhawk's machine.

Patrolman Edward L. Sewyer had left the scout car a moment before the chase started. Had he

been in the car, he probably would have been killed, for the right side of the car was demolished.

Rice and Sparhawk received head wounds and the patrolman is also suffering from internal injuries.

hour. The patrolman was seriously injured. Photograph copyright, 1938, by The Baltimore New-Post. All Rights

The above article and photo courtesy of L. Robin Newcomb 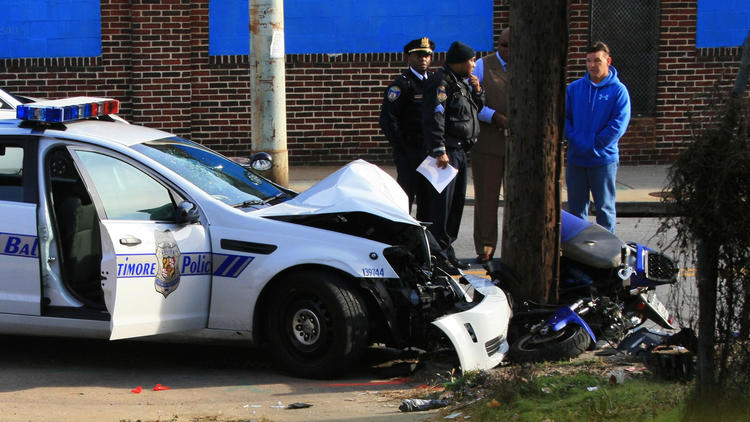 Baltimore police are investigating an accident involving officers and a suspect in the area of Bonaparte Avenue in East Baltimore. (Maggie Ybarra/Special to the Baltimore Sun) By Justin George, The Baltimore Sun This email address is being protected from spambots. You need JavaScript enabled to view it.
Highway and Road Disasters
Police investigating pursuit called off that resulted in a crash that left an officer in grave condition
A patrol car chasing a moped Sunday resulted in a crash that seriously injured officers and the rider

One Baltimore police officer remained in grave condition Monday after the patrol car he was in slammed into a telephone pole Sunday afternoon after continuing a pursuit his commanding officer had called off.

A female officer, who also was in the car, remained in critical but stable condition with broken bones. The crash also involved the driver of a moped police said the officers had pursued, who was also injured and is hospitalized.

"One officer at this moment is fighting for his life at [Maryland] Shock Trauma [Center]," Baltimore police Deputy Commissioner Jerry Rodriguez said.

The crash occurred about 1 p.m. Sunday in Northwest Baltimore. The incident began after an officer saw a group of dirt bikers assembling in an alley, police said. Upon being spotted by police, the riders fled on their bikes, except one man who ran. The officer followed in his marked patrol car and saw the man hop on the back of a moped that stopped to pick him up.

Baltimore police have a strict policy that allows officers to pursue if the vehicles they are chasing carry suspects who pose immediate and serious threats to the public. Officers must get permission from a shift commander to pursue.

In this case, a sergeant told the three officers to discontinue the chase, Rodriguez said. Fifteen minutes later, officers called for paramedics, he said.

The patrol car had continued the pursuit and crashed into a telephone pole in the 2200 block of Kirk Ave. after the scooter made a hard turn into an alley, police said.

Rodriguez said police don't know why the officers disobeyed an order to stop.

"We want to know why," Rodriguez said. "We have more questions than answers, but we are attempting to get those answers."

Rodriguez said forensics investigators and members of police's CRASH team were called to retrace the moments preceding the crash. A police helicopter was also used to survey the crash site and map the route the pursuit had taken.

The third officer in the patrol car, a man, was not hurt. Rodriguez said investigators want to know why three police officers were in the patrol car. Marked cars are meant to carry no more than two officers.

While dirt bikes are illegal in the city, the moped was a licensed city vehicle, Rodriguez said. Fleeing police was the only violation the driver could be cited for, he added. No charges have been filed against the rider.

Baltimore police's Force Investigation Team, which reviews shootings and other serious incidents in which police force is used, is investigating.

Police did not release the name of the moped driver or the three officers, who Rodriguez said ranged in experience from a few years to about a decade on the job.

Police said the dirt bikers had assembled in the alley to attend a large motorcycle rally that was held a few hours later.

Scores of dirt bikers and spectators took to the streets around Druid Hill Park on Sunday afternoon for a memorial ride in honor of Devin Rankin, known among riders as "Lor Dev." Rankin was shot to death Thursday in the 4600 block of Mannasota Ave. in a killing that remains unsolved.

Some on social media referred to him as the "No-hands king" because of his ability to ride on one wheel without steering.Copyright © 2014,

May 26, 1965 at 10:30 AM, Northern District Radio Car #502, manned by Officer Robert DiStefano driving and Officer Robert Michael were responding to a Signal 13 (Assist an Officer) call when at the intersection of 29th and Remington, they were cut off by a truck that had gone through a RED light. RC 502 was being operated with “lights and siren” struck the truck and turned it over on its roof. The truck then hit a utility pole that prevented it from breaking through the show window of Jarman Pontiac. Notice the indentation on the side of the truck. Joe deCarlo was the Sergeant and responded to the accident scene.

In the photo showing the front of the totaled (the engine was partially in the front seat) police car, that Officer Bob Michael, was talking to the T.I.S. Investigator.
Please note the price of regular gas in the photo, 28.9 cents per gallon!
Miraculously, no one was hurt in this accident!

Leon Tomlin, a patrolman, at that time, was assigned to RC 502 car, on the relieving shift, thanked Officer DiStefano and Officer Michael for "expediting" the replacement process of the old unit. Ironically, the driver of the truck named John Brennan later joined the Baltimore Police Department. While in the academy he avoided his firearm and defense tactic instructors who were none the less, Officer Robert DiStefano and Officer Bob Michael. John Brennan later attained the rank of Sergeant. Sergeant Pattinson of the "I can teach a monkey how to drive, fame", informed Officer DiStefano that it was the worst accident that he had seen for a long time!

2013 Officers Hit by Another Car

Copies of: Your Baltimore Police Department Class Photo, Pictures of our Officers, Vehicles, Equipment, Newspaper Articles relating to our department and or officers, Old Departmental Newsletters, Lookouts, Wanted Posters, and or Brochures. Information on Deceased Officers and anything that may help Preserve the History and Proud Traditions of this agency. Please contact Retired Detective Kenny Driscoll. How to Dispose of Old Police Items  If you come into possession of Police items from an Estate or Death of a Police Officer Family Member and do not know how to properly dispose of these items please contact: Retired Detective Ken Driscoll - Please dispose of POLICE Items: Badges, Guns, Uniforms, Documents, PROPERLY so they won’t be used IMPROPERLY.

Anyone with information, photographs, memorabilia, or other "Baltimore City Police" items can contact Ret. Det. Kenny Driscoll at This email address is being protected from spambots. You need JavaScript enabled to view it. follow us on Twitter @BaltoPoliceHist or like us on Facebook by clicking HERE pics can be mailed to Baltimore City Police History - 8138 Dundalk Ave. Baltimore Md. 21222

Copies of: Baltimore Police Department class photos, pictures of officers, vehicles, equipment, newspaper articles relating to our department. Also wanted Departmental Newsletters, Lookouts, Wanted Posters, Hot Sheets Reports, and or Brochures. Information on retired or deceased officers, fallen or injured officers and anything that may help us to preserve the history and proud traditions of this agency.