Deprecated: Methods with the same name as their class will not be constructors in a future version of PHP; Color has a deprecated constructor in /home/bcph911/public_html/Dec-2017/templates/dream/features/color.php on line 11
 Fort Sumter
Fort Sumter
You are here: Home

Bombardment of the Fort by the Confederates

At 4:30 a.m. on April 12, 1861, Lt. Henry S. Farley, acting upon the command of Capt. George S. James fired a single 10-inch mortar round from Fort Johnson. (James had offered the first shot to Roger Pryor, a noted Virginia secessionist, who declined, saying, "I could not fire the first gun of the war.") The shell exploded over Fort Sumter as a signal to open the general bombardment from 43 guns and mortars at Fort Moultrie, Fort Johnson, the floating battery, and Cummings Point. Under orders from Beauregard, the guns fired in a counterclockwise sequence around the harbor, with 2 minutes between each shot; Beauregard wanted to conserve ammunition, which he calculated would last for only 48 hours. Edmund Ruffin, another noted Virginia secessionist, had traveled to Charleston to be present for the beginning of the war, and fired one of the first shots at Sumter after the signal round, a 64-pound shell from the Iron Battery at Cummings Point. The shelling of Fort Sumter from the batteries ringing the harbor awakened Charleston's residents (including diarist Mary Chesnut), who rushed out into the predawn darkness to watch the shells arc over the water and burst inside the fort.

Major Anderson held his fire, awaiting daylight. His troops reported for a call at 6 a.m. and then had breakfast. At 7 a.m., Capt. Abner Doubleday fired a shot at the Ironclad Battery at Cummings Point. He missed. Given the available manpower, Anderson could not take advantage of all of his 60 guns. He deliberately avoided using guns that were situated in the fort where casualties were most likely. The fort's best cannons were mounted on the uppermost of its three tiers—the barbette tier—where his troops were most exposed to incoming fire from overhead. The fort had been designed to withstand a naval assault, and naval warships of the time did not mount guns capable of elevating to shoot over the walls of the fort. However, the land-based cannons manned by the Confederates were capable of high-arcing ballistic trajectories and could, therefore, fire at parts of the fort that would have been out of naval guns' reach. Fort Sumter's garrison could only safely fire the 21 working guns on the lowest level, which themselves, because of the limited elevation allowed by their embrasures, were largely incapable of delivering fire with trajectories high enough to seriously threaten Fort Moultrie. Moreover, although the Federals had moved as many of their supplies to Fort Sumter as they could manage, the fort was quite low on ammunition and was nearly out at the end of the 34-hour bombardment. A more immediate problem was the scarcity of cloth gunpowder cartridges or bags; only 700 were available at the beginning of the battle and workmen sewed frantically to create more, in some cases using socks from Anderson's personal wardrobe. Because of the shortages, Anderson reduced his firing to only six guns: two aimed at Cummings Point, two at Fort Moultrie, and two at the Sullivan's Island batteries.

Ships from Fox's relief expedition began to arrive on April 12. Although Fox himself arrived at 3 a.m. on his steamer Baltic, most of the rest of his fleet was delayed until 6 p.m., and one of the two warships, USS Powhatan, never did arrive. Unbeknownst to Fox, it had been ordered to the relief of Fort Pickens in Florida. As landing craft was sent toward the fort with supplies, the artillery fire deterred them and they pulled back. Fox decided to wait until after dark and for the arrival of his warships. The next day, heavy seas made it difficult to load the small boats with men and supplies and Fox was left with the hope that Anderson and his men could hold out until dark on April 13.

Although Sumter was a masonry fort, there were wooden buildings inside for barracks and officer quarters. The Confederates targeted these with a Heated shot (cannonballs heated red hot in a furnace), starting fires that could prove more dangerous to the men than explosive artillery shells. At 7 p.m. on April 12, a rain shower extinguished the flames and at the same time, the Union gunners stopped firing for the night. They slept fitfully, concerned about a potential infantry assault against the fort. During the darkness, the Confederates reduced their fire to four shots each hour. The following morning, the full bombardment resumed and the Confederates continued firing a hot shot against the wooden buildings. By noon most of the wooden buildings in the fort and the main gate were on fire. The flames moved toward the main ammunition magazine, where 300 barrels of gunpowder were stored. The Union soldiers frantically tried to move the barrels to safety, but two-thirds were left when Anderson judged it was too dangerous and ordered the magazine doors closed. He ordered the remaining barrels thrown into the sea, but the tide kept floating them back together into groups, some of which were ignited by incoming artillery rounds. He also ordered his crews to redouble their efforts at firing, but the Confederates did the same, firing the hot shots almost exclusively. Many of the Confederate soldiers admired the courage and determination of the Yankees. When the fort had to pause its firing, the Confederates often cheered and applauded after the firing resumed and they shouted epithets at some of the nearby Union ships for failing to come to the fort's aid.

The fort's central flagpole was knocked down at 1 p.m. on April 13, raising doubts among the Confederates about whether the fort was ready to surrender. Col. Louis Wigfall, a former U.S. senator, had been observing the battle and decided that this indicated the fort had had enough punishment. He commandeered a small boat and proceeded from Morris Island, waving a white handkerchief from his sword, dodging incoming rounds from Sullivan's Island. Meeting with Major Anderson, he said, "You have defended your flag nobly, Sir. You have done all that it is possible to do, and General Beauregard wants to stop this fight. On what terms, Major Anderson, will you evacuate this fort?" Anderson was encouraged that Wigfall had said "evacuate," not "surrender." He was low on ammunition, fires were burning out of control, and his men were hungry and exhausted. Satisfied that they had defended their post with honor, enduring over 3,000 Confederate rounds without losing a man, Anderson agreed to a truce at 2:00 p.m.

Fort Sumter raised Wigfall's white handkerchief on its flagpole as Wigfall departed in his small boat back to Morris Island, where he was hailed as a hero. The handkerchief was spotted in Charleston and a delegation of officers representing Beauregard—Stephen D. Lee, Porcher Miles, a former mayor of Charleston, and Roger Pryor—sailed to Sumter, unaware of Wigfall's visit. Anderson was outraged when these officers disavowed Wigfall's authority, telling him that the former senator had not spoken with Beauregard for two days, and he threatened to resume firing. Meanwhile, General Beauregard himself had finally seen the handkerchief and sent a second set of officers, offering essentially the same terms that Wigfall had presented, so the agreement was reinstated.

The Union garrison formally surrendered the fort to Confederate personnel at 2:30 p.m., April 13. No one from either side was killed during the bombardment. During the 100-gun salute to the U.S. flag—Anderson's one condition for withdrawal—a pile of cartridges blew up from a spark, mortally wounding privates Daniel Hough and Edward Galloway, and seriously wounding the other four members of the gun crew; these were the first military fatalities of the war. The salute was stopped at fifty shots. Hough was buried in the Fort Sumter parade ground within two hours after the explosion. Galloway and Private George Fielding were sent to the hospital in Charleston, where Galloway died a few days later; Fielding was released after six weeks. The other wounded men and the remaining Union troops were placed aboard a Confederate steamer, the Isabel, where they spent the night and were transported the next morning to Fox's relief ship Baltic, resting outside the harbor bar.

Our Banner in the Sky (1861) by Frederic Edwin Church

Anderson carried the Fort Sumter Flag with him North, where it became a widely known symbol of the battle and rallying point for supporters of the Union. This inspired Frederic Edwin Church to paint Our Banner in the Sky, described as a "symbolic landscape embodying the stars and stripes." A chromolithograph was then created and sold to benefit the families of Union soldiers. 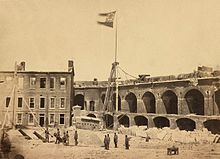 Confederate Flag flying in Fort Sumter after the 1861 surrender

The bombardment of Fort Sumter was the first military action of the American Civil War. Following the surrender, Northerners rallied behind Lincoln's call for all states to send troops to recapture the forts and preserve the Union. With the scale of the rebellion apparently small so far, Lincoln called for 75,000 volunteers for 90 days. Some Northern states filled their quotas quickly. There were so many volunteers in Ohio that within 16 days they could have met the full call for 75,000 men by themselves.Other governors from border states were undiplomatic in their responses. For example, Gov. Claiborne Jackson wrote, "Not one man will the state of Missouri furnish to carry on any such unholy crusade", and Gov. Beriah Magoffin wrote, "Kentucky will furnish no troops for the wicked purpose of subduing her sister Southern states." The governors of other states still in the Union were equally unsupportive. The call for 75,000 troops triggered four additional slave states to declare their secession from the Union and join the Confederacy. The ensuing war lasted four years, effectively ending in April 1865 with the surrender of General Robert E. Lee's Army of Northern Virginia at Appomattox Courthouse.

Charleston Harbor was completely in Confederate hands for almost the entire four-year duration of the war, leaving a hole in the Union naval blockade. Union forces conducted major operations in 1862 and 1863 to capture Charleston, first overland on James Island (the Battle of Secessionville, June 1862), then by naval assault against Fort Sumter (the First Battle of Charleston Harbor, April 1863), then by seizing the Confederate artillery positions on Morris Island (beginning with the Second Battle of Fort Wagner, July 1863, and followed by a siege until September). After pounding Sumter to rubble with artillery fire, a final amphibious operation attempted to occupy it (the Second Battle of Fort Sumter, September 1863) but was repulsed and no further attempts were made. The Confederates evacuated Fort Sumter and Charleston in February 1865 as Union Maj. Gen. William T. Sherman outflanked the city in the Carolinas Campaign. On April 14, 1865, four years to the day after lowering the Fort Sumter Flag in surrender, Robert Anderson (by then a major general, although ill and in retired status) returned to the ruined fort to raise the flag he had lowered in 1861

Two of the cannons used at Fort Sumter were later presented to Louisiana State University by General William Tecumseh Sherman, who was president of the university before the war began.

Please contact Det. Ret. Kenny Driscoll if you have any pictures of you or your family members and wish them remembered here on this tribute site to Honor the fine men and women who have served with Honor and Distinction at the Baltimore Police Department.

Copies of: Baltimore Police Department class photos, pictures of officers, vehicles, equipment, newspaper articles relating to our department. Also wanted Departmental Newsletters, Lookouts, Wanted Posters, Hot Sheets Reports, and or Brochures. Information on retired or deceased officers, fallen or injured officers and anything that may help us to preserve the history and proud traditions of this agency.